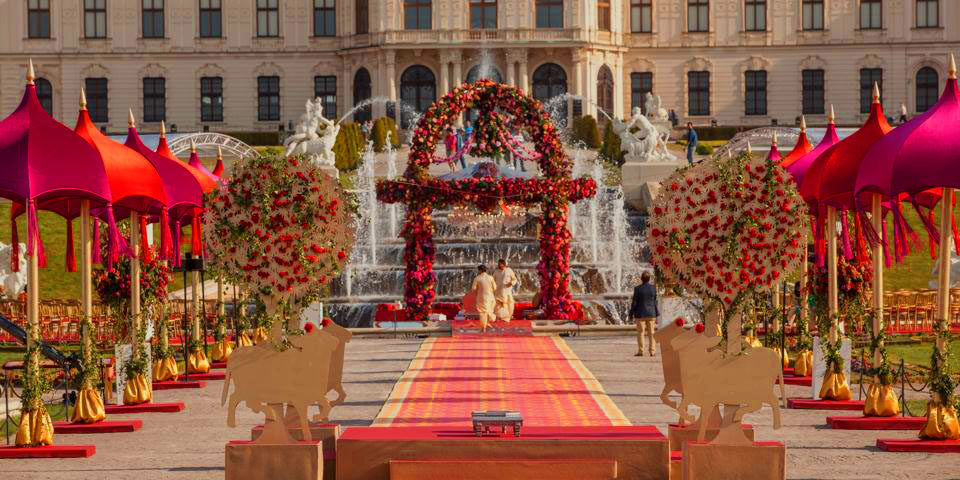 Gorgeous dresses, vivid colours, heavenly meals out of this world, exotic traditions, world-famous special guest. These are some of the characteristics of the wealthy Indian businessman, Parth Jindal ’s and the beautiful Anushree Jasani ’s three-day wedding in Vienna.

Their engagement took place in May of 2015 which was not frittered away either: it was held in Mumbai with 2000 guests, there were political leaders and CEO’s of large indian companies among them. The groom is the heir of JSW Group conglomerate company, the CEO of the professional football club, Bengaluru FC, and the director of JSW Sport. Therefore we can guess that they didn’t spare money during this joyful event. 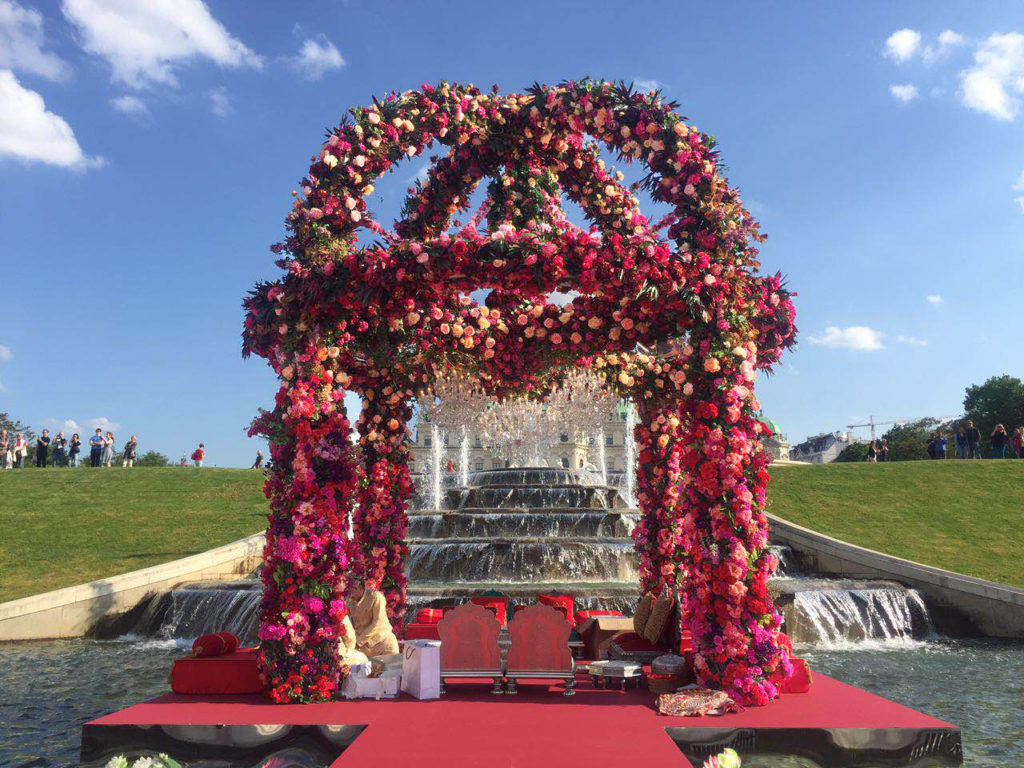 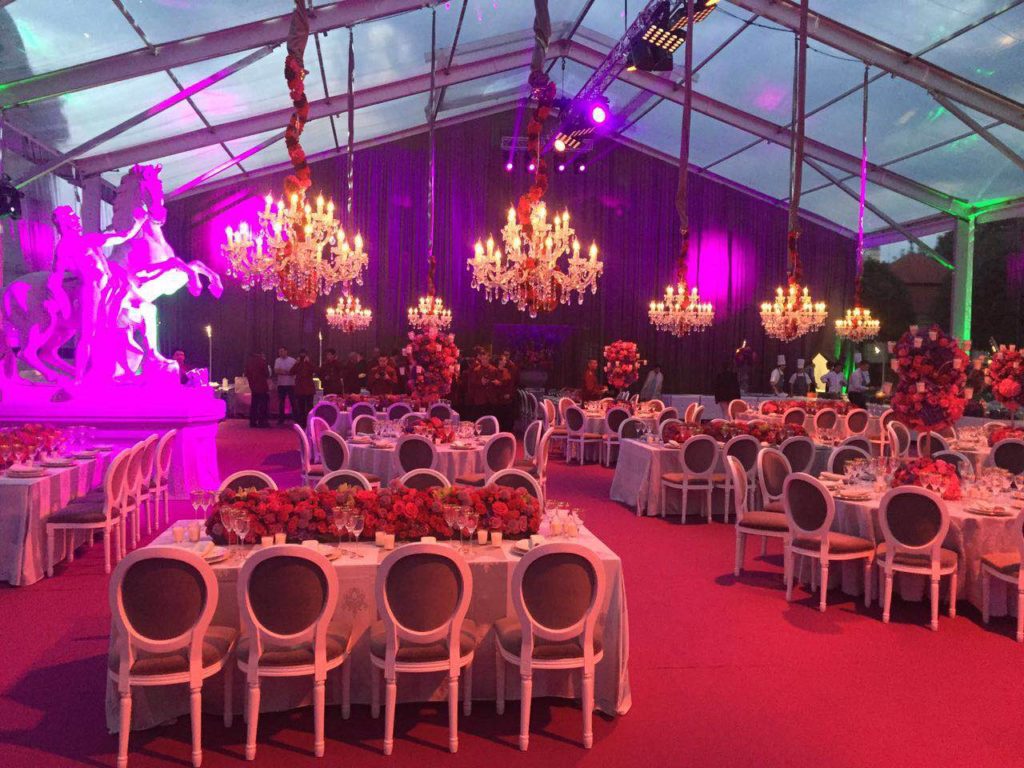 It is true, because Indian weddings are of enormous importance for the lives of the engaged couples. The beautiful dresses, jewelry and decorations, delicious meals and breathtaking locations are all intended to attract wealth and richness. Thus instead of the usual pastel shades like in the Western cultures, the red and gold shades dominate here, because these are the colours of wealth, happiness and bright fire. During Indian wedding ceremonies, people tend to put more focus on the spiritual, religious side of the event rather than the on the formal aspects. The bride and groom link their fate and karma together after being purified physically, mentally and spiritually.

The ceremony that lasts for several days will affect the whole marriage of the couple, therefore positive actions and gratitude they also show to their guests are very important to them in this time of period, which they show to their guests as well. For example during this luxurious event three luxury hotel’s in Vienna were fully rented for the huge bridal party. Gift bags containing premium chocolates, anti-hangover products among other things were waiting for approximately 1000 guests. On the occasion of the special event Air India launched charter flights.

The actual ceremony happened on the 9th of May on Monday, but they held a grand dinner the previous night which was made more unforgettable by the performance of Enrique Iglesias . The breathtakingly beautiful Hofburg Palace was chosen for the location of this little „appetizer”, which is one of the most monumental adornments of Vienna’s city centre. 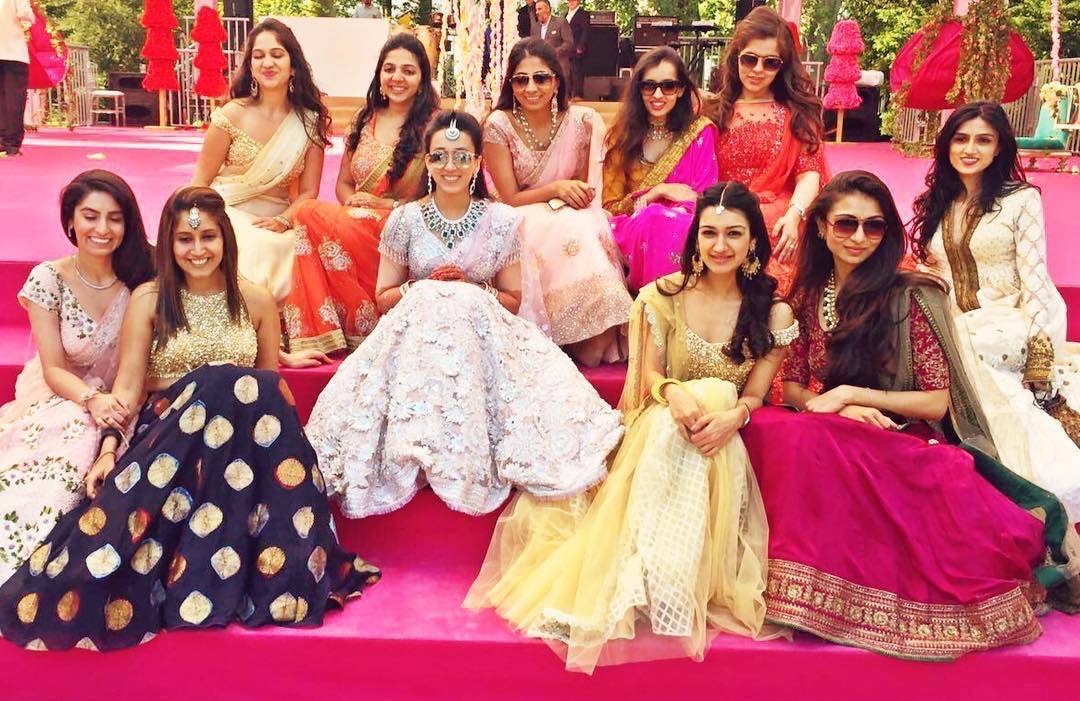 We can suspect by the number of guests that a very colourful society was celebrating the union of the groom and his bride. Partly for this reason the menu could not run out of the rich variety of Indian cuisine. Besides Indian food, Italian, French, Korean and Japanese meals were also part of the menu. The last one was provided by no one else but the famous Nobu Budapest restaurant situated in the capital of Hungary, in Erzsébet square.

The luxurious wedding was held in the yard of the magnificent baroque castle, Belvedere Palace. Special flowers and trees make the garden of the wonderful building, which functioned as a summer residence, enchanting, so this location was worthy for the large ceremony.

If we believe in Indian religion and the wedding will have significant impact on Parth Jindal’s and Anushree Jasani ’s life, then the decades coming to them will contain a lot of enviable happiness, love and wealth.